Doris McEwan Nicholls, who helped develop the study of biosciences at York University and had been a member of the American Society for Biochemistry and Molecular Biology since 1975, died Aug. 17, 2021, the ASBMB learned recently. She was 94. 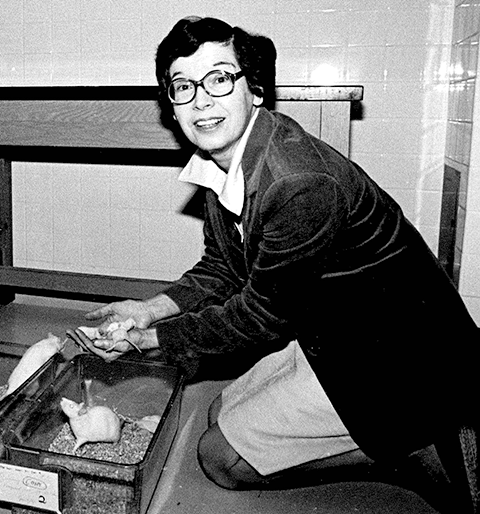 Born Jan. 24, 1927, in Bayfield, Ontario, to Fred and Ellen McEwan, Nicholls excelled academically from an early age. She earned bachelor’s and master’s degrees in botany, an MD, and a Ph.D. in biochemistry, all from the University of Western Ontario.

Doris McEwan met her future husband, Ralph Nicholls, a physics professor, when a water leak in her lab overflowed into his lab, according to a memorial article on the YFile website. In 1965, the two were recruited to help establish York University in Toronto where they both taught and conducted research into the 2000s.

Doris Nicholls studied numerous topics over the course of her long career. In the 1950s she published on how the adrenal gland, which produces hormones including adrenaline, aldosterone and cortisol, responded to cold stress. In the 1960s, an interest in kidney function led her to study how protein synthesis and phosphate metabolism changed in kidney disease. By the early 1970s she was conducting fractionation and reintroduction experiments to identify protein factors that are important for translation; her lab identified a termination factor that was overexpressed in a mouse model of muscular dystrophy and also explored the ways that exposure to pesticides such as DDT upregulates protein synthesis. In the 1980s and 1990s she investigated the effects of exposure to heavy metals on various tissues, with particular interest in how lead, cadmium and aluminum exposure changed mRNA expression and protein synthesis.

Nicholls mentored many graduate students and was considered an intelligent and caring professor. Ron Pearlman, an emeritus professor, described her as a colleague “who in her quiet but important way made strong contributions … to the development of the molecular biosciences at York.”

An excellent cook and baker who prepared her three daily meals from scratch until her last days, Nicholls was also known for her ability to “recall a litany of facts on many subjects as well as names and places with a ferocity that was unparalleled,” the article states, and all her life remained “compassionate, fun-loving and caring with an infectious laugh that seemed too big for her tiny frame.”