ASBMB Today Opinions Hell, heaven, a whale and me
Wellness

Hell, heaven, a whale and me 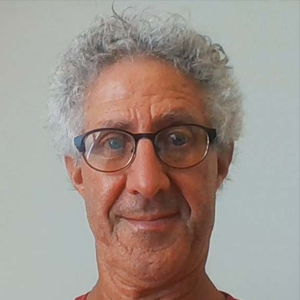 My advice for staying sane in our unique circumstances is to read long and impenetrable books that you were supposed to read in college. Recently a poet and a toxicologist (different people, but it would make a good combination) suggested that I read "Paradise Lost" by John Milton and "Moby Dick" by Herman Melville, respectively. Now you might think I am being snooty, and dear Lord, you would not be the first, but one of the limited number of advantages of aging is that sometimes books like these get transformed into instruction manuals for life. And perhaps they will for you as well.

My strategy for reading them, because I had the time, was to approach them as I would an important but dense manuscript, taking my time to understand every passage. After all, the devil (literally in the case of "Paradise Lost") is in the details. Here are some tidbits for your consideration.

"Paradise Lost," Milton's luscious and extravagantly trippy epic poem, describes Adam and Eve's fall from God's grace. You may recall that their fall results from Adam and Eve being seduced by Satan to eat an apple from the Tree of Knowledge after being expressly forbidden to do so by God. I am by no means the first to notice that at times "Paradise Lost" seems like a coded love letter to Satan. With that in mind, since we are now going through hell, why not get some expert advice?

The poem opens in the aftermath of Satan's failed rebellion. He and his minions wake up in a lake of fire. Who among us has not felt this way after a two-week experiment yields error bars the height of Mount Olympus? Yet Satan gets himself up, brushes off the lava and successfully exhorts his legions to make God pay for dooming them to everlasting suffering. Not the plan that I would have chosen, but still, you have to admire his moxie.

So, first piece of advice: to recover from failure, plot revenge. 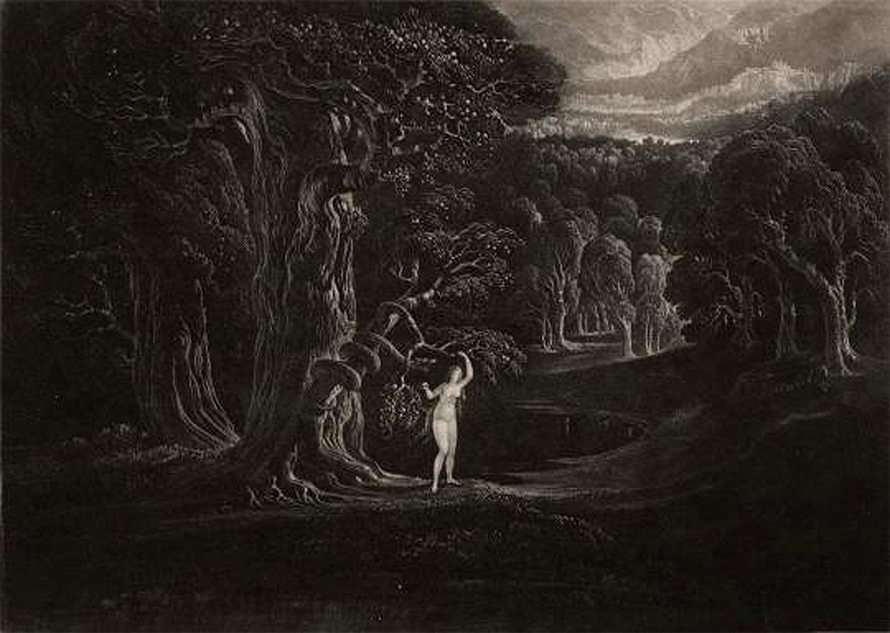 Museum of Fine Arts, Houston/Wikimedia commons
This illustration of Satan tempting Eve is a mezzotint plate by artist John Martin from a 19th century edition of John Milton's "Paradise Lost.

We are all in this together

Many of you may know that "Moby Dick" is based in part on the cursed voyage of the Essex, a whaling ship out of Nantucket. The Essex was rammed and sunk by a whale who was annoyed by the sailors' refusal to turn down their infernal hornpipes. After the sinking of the Essex in the middle of the Pacific Ocean, the sailors escaped in their small whaleboats with few supplies. Eventually, succumbing to starvation, the survivors resorted to cannibalism.

The captain of the voyage, George Pollard, had brought his sister's son along on the voyage and promised to take care of him. You probably know where this is going. Pollard made sure that his nephew was in his whaleboat after the sinking of the Essex. Pollard survived, but there was nothing left of his nephew when they were rescued. Which no doubt led to a rather awkward conversation between Pollard and his sister on his return to Nantucket. "I loved your son, especially with a touch of aioli."

So here, before even getting into "Moby Dick" itself, is my first takeaway relating to the Melville classic: During these trying times, while we are all in this lifeboat together, let's not eat each other. Unless absolutely necessary.

Forging a path through uncertain times

We need to transit from our previous world to the new post-COVID-19 one. In "Paradise Lost," Satan presents a plan to the assembled mass of fallen angels to corrupt God's newly created Earth. But to get to Earth from hell, a terrifying and shapeless void must be crossed. He asks for volunteers, but the newly appointed demons look at each other, shrug, and answer, "Sorry, busy torturing telemarketers." So Satan declares he will undertake the perilous journey himself. This is what he encounters:

"The secrets of the hoary deep, a dark
Illimitable ocean without bound,
Without dimension, where length, breadth, and highth,
And time and place are lost; where eldest Night
And Chaos, ancestors of Nature, hold
Eternal anarchy, amidst the noise
Of endless wars, and by confusion stand."

Yikes! Satan has wandered into a faculty meeting.

How does Satan make his way through this frightening, uncharted territory?

"O'er bog or steep, through straight, rough, dense, or rare,
With head, hands, wings, or feet pursues his way,
And swims or sinks, or wades, or creeps, or flies."

So, two things here. Say what you want about Satan, but in taking on the journey through Chaos himself, he shows true leadership skills. Secondly, to make it through, he will do whatever it takes; he will creep if creeping will get him where he wants to go. 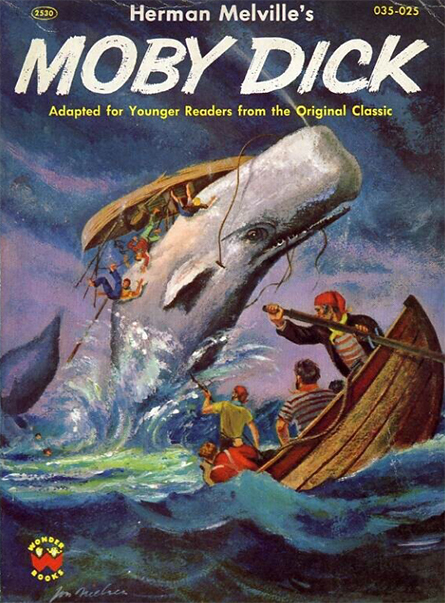 At one point in "Moby Dick," the narrator, Ishmael, is enumerating the uses of whale oil to emphasize how essential the products of these whaling voyages were at the time. He lands on the use of whale oil in anointing the heads of royalty:

"Much might be ruminated here, concerning the essential dignity of this regal process, because in common life we esteem but meanly and contemptibly a fellow who anoints his hair, and palpably smells of that anointing. In truth, a mature man who uses hair-oil, unless medicinally, that man has probably got a quoggy spot in him somewhere. As a general rule, he can't amount to much in his totality."

There is no getting around that "Paradise Lost" is relentlessly misogynistic, at least superficially. Although the poem rails against the incautious and seductive nature of women, Eve is far more interesting than Adam, who comes off as rather dim. At one point, in his despair, Adam suggests to Eve that it would be unfair to pass their cursed sin on to their offspring. He suggests that they should refrain from what Milton delicately terms "connubial love." To which Eve, wise as always, replies, "You're kidding, right?"

After the couple gets word that evil is afoot (or, in this case, aslither), Adam insists that Eve stay within his sight. Eve will have none of it, and off she goes to enjoy some alone time. She encounters Satan (in the form of a snake) without that killjoy Adam getting into the middle of things. Satan easily convinces Eve to eat from the forbidden tree, because why should she be denied knowledge?

"That whoso eats thereof, forthwith attains
Wisdom without their leave? And wherein lies
Th' offence, that man should thus attain to know?"

I am with Eve and Satan on this one. It is our business to seek knowledge. We not only would have eaten the apple from the Tree of Knowledge but also would have dissected it; fractionated it into skin, seed and flesh; and performed lipidomics, proteomics, genomics, glycomics, epigenomics, metabolomics, and good-and-evil-omics on it till it yielded enough preliminary data for an R01 application. Adam is a nice enough guy, but I would not want him in our graduate program. Give Eve a fellowship.

Focusing on a goal and finding a team

As you no doubt know, "Moby Dick" is about how Ahab, the captain of the whaling ship Pequod, is focused maniacally on hunting down and killing the monstrous, homicidal white whale, Moby Dick. Students have been hounded mercilessly for eons to identify metaphors in the story. Am I Ahab, flogging my lab members in pursuit of Moby Dick in the guise of a Cell paper? If so, why does it keep swimming away? Well, whatever it all means, we can look to Melville to describe how it feels to be in the grip of a goal and whom you should pick to help you attain it:

"Ahab had cherished a wild vindictiveness against the whale, all the more fell for that in his frantic morbidness he at last came to identify with him, not only all his bodily woes, but all his intellectual and spiritual exasperations. The White Whale swam before him as the monomaniac incarnation of all those malicious agencies which some deep men feel eating in them, till they are left living on with half a heart and half a lung. Here, then, was this grey-headed, ungodly old man, chasing with curses a Job's whale round the world, at the head of a crew, too, chiefly made up of mongrel renegades, and castaways, and cannibals."

I guess the lesson here is that when you pick a project, go at it with half a heart and half a lung. And for your crew? Speaking as a gray-headed, ungodly old(ish) man, my favorite colleagues are mongrel renegades, castaways and cannibals. I would welcome them into my lab any day.

Paradise is what you make it

Let's talk about Adam and Eve's expulsion from Eden. One of my children once wrote that when they came to the lab, they saw that it was in my lab that I was truly home (too late for parenting advice, but thanks for your concern). So, to spell it out, the lab is my Paradise. When my institution announced that our labs were going to be shut down, I knew how Adam felt when the archangel Michael told him that he would be expelled from Eden:

"Adam at the news
Heart-strook with chilling gripe of sorrow stood,
That all his senses bound."

Capturing my reaction exactly when I was exiled from the comforting piles of papers composting on my office desk and the wonderful cast of renegades and castaways that constitute my colleagues and lab mates.

My point here is that in March of 2020 we were cast out of paradise. Our world has been changed irrevocably. But Milton has some guidance for us in the form of Adam and Eve's final response:

"Some natural tears they dropped, but wiped them soon;
The world was all before them, where to choose
Their place of rest, and Providence their guide:
They hand in hand with wand'ring steps and slow,
Through Eden took their solitary way."

Unlike Adam and Eve, we are being readmitted carefully to Paradise. So here is what I think is the most important lesson from this poem:

If you are back in the lab, or will be soon, cherish your favorite vortex mixer. After months of silence, it hums with delight at your return.

Binks Wattenberg is a professor in the department of biochemistry and molecular biology at Virginia Commonwealth University and a member of the ASBMB Today editorial advisory board.