Being an instructor can be scary, especially if it is the first time you are teaching. Whether you are standing in front of 25 or 250 students, it can feel like you and your knowledge are on display for all to see and to critique.

You carefully pick out the words you want to use to string together long sentences that lapse into lectures that you hope stay with your students for a lifetime (or at least through the next exam).

You’re nervous, making sure your voice doesn’t crack, as you get ready to call roll. You preface it by saying, “Let me know when I call your name if you go by another name or a nickname.” You carefully and correctly pronounce every name.

You want your students to know you care.

Now imagine you are one of the students sitting a lecture hall with 24 or 249 classmates, some of whom you’ve met before and some of whom you have not. You are nonbinary and use they/them pronouns and a name that was not given to you at birth.

You dread roll call because your university doesn’t allow you to change your name on your academic profile. Therefore, at every first class of every course of every semester, you have to announce in front of strangers: “That is not my name.”

You worry about what the professor and other students think. Are they OK using they/them pronouns? Or are they of the “I don’t do the whole pronouns thing” variety? Are they going to ask where your other name came from like others have before? Are they going to say in front of the whole room, “What a different name! Is it a family name?”

And you ask yourself: “Why am I the only student you’re asking that? Can’t you see I’m uncomfortable?”

As the semester chugs on, you participate less in class, because every time you do your professor repeats your answer using the wrong pronouns to identify you. You feel like you do not belong and are not seen or accepted for who you are. You wonder if the field is for you. You consider leaving science altogether.

How it can feel as a LGBTQ+ scientist in the classroom

As a LGBTQ+ scientist — specifically a gay nonbinary scientist — I often feel lonely in STEM. As someone who uses they/them pronouns, I have had the uncomfortable experience of saying my pronouns in front of everyone, hoping that the faculty member and students won’t give me trouble.

I have had to sit through Zoom meetings and seminars at which I’ve been misgendered even with my pronouns visible on the screen right next to my name. I have had to remind people of my pronouns repeatedly, only for them to use incorrect pronouns during subsequent interactions.

There have been times when I have been misgendered openly in a seminar and other attendees have reached out to apologize and ask if I am OK. I always say “Yes, I am fine,” even though every time it hurts me. It hurts to know that some people don’t even notice the mistake and that most will not apologize. It hurts in my core: It feels as if I am not important enough to be properly referred to, even if that is not the speaker's intention.

I have also had wonderful experiences. I have watched people learn, grow and self-correct when they misgender me. I appreciate when someone self-corrects because it shows that they care and that they are trying.

What we can do

But how can we bring this back into our classrooms? 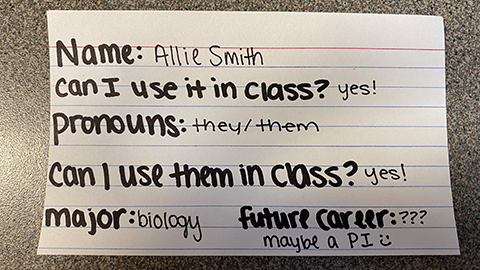 Example notecard asking students about themselves.

For starters, rather than reading the roll from the registrar’s class roster on the first day of class, we can give out little scraps of paper or notecards and prompt each student to write their name and whether or not that name can be used in front of the class and/or only in private interactions.

This technique keeps a student from being dead named (being called a name they were given at birth but with which they do not identify). Also, by asking when the name should to be used, we can ensure that we are not outing the student to the entire room.

We can also ask on the card about a student’s pronouns. We can have them fill in the blank rather than giving predetermined options. Again, we can ask if their pronouns can be used in front of everyone.

Finally, we can ask other questions, such as ones about their major and career aspirations, so that it feels more personal.

We can ask the class to hand in the cards, run roll call from them and take time after class to check the list against the official roster.

Another simple way to ablate negative experiences is by solely using they/them pronouns in the class. By taking gendered pronouns out of the classroom entirely, we avoid misgendering students. Also, referring to students by their names rather than their pronouns means we don’t have to struggle to remember everyone’s pronouns.

Be honest with students

Practice makes perfect. Make sure your students know you are trying, and let them know that they can correct you if you make a mistake.

But, importantly, if a student does correct you, you should not continue to dead name or misgender them, because that will make them no longer feel comfortable with you. Repeatedly dead naming or misgendering someone conveys to them that they are not important enough for their name/pronouns to be learned and/or that you do not respect them and possibly the LGBTQ+ community.

Word gets around. It’s possible that future LGBTQ+ students will not feel comfortable with you before ever entering the room.

At the end of the day, instructors are supposed to not only fill a student’s mind full of knowledge but also to show them that they have a place in the field. An easy way to show LGBTQ+ students that they are welcome, safe and accepted in STEM fields is to ensure that you do not dead name or misgender them.