What the 2020 election results might mean for the scientific community

Biden has promised “disciplined, trustworthy leadership grounded in science”; runoffs will determine the balance of power in Congress

The election of Joseph R. Biden Jr. as the 46th president of the United States marks the end of a bitter campaign season and leaves in its wake a still deeply divided electorate struggling to survive a pandemic that has killed hundreds of thousands of Americans and has stalled the economy in ways not seen in more than a generation.

Biden is already setting the tone

There are great differences between President-elect Biden and President Donald Trump, and the contrast has been stark in even just the first days of the transition. While Trump has spent much of the past several months downplaying the health risks of the pandemic, Biden named a COVID-19 task force on his first "work day" of the transition, bringing together 12 experts on disease and public health to begin developing a pandemic response plan to be implemented on Day 1 of his presidency. Biden also encouraged all Americans to wear a mask, a simple gesture that public health experts have begged Trump to make. 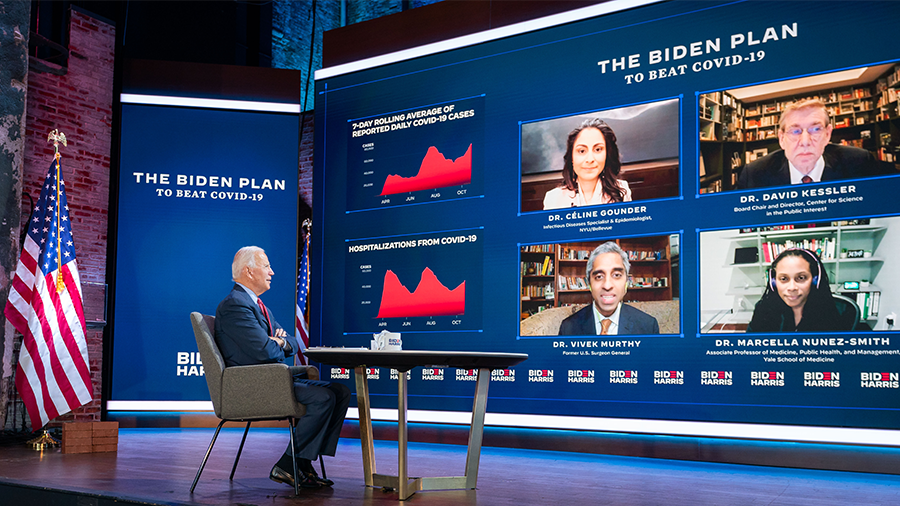 Adam Schultz/Biden for President
Then-candidate Joe Biden attends a COVID-19 briefing in October in Delaware. Earlier this week, he announce the formation of his COVID-19 task force as president-elect.

Biden also has promised “disciplined, trustworthy leadership grounded in science,” which I interpret to mean more subject matter experts at the helms of agencies, such as the Environmental Protection Agency, and leading science programs throughout the federal government. I also expect the next director to the White House Office of Science and Technology Policy, who acts as the science adviser to the president, will play a more prominent role. During the Obama administration, the OSTP director was elevated to Cabinet-level importance, while the Trump administration has devalued the position.

Some of the more immediate steps a President Biden could take would be reversing executive orders issued by Trump that have been harmful to the American scientific enterprise.  Restrictions on immigration, proposed changes to visa timing rules, and restrictions on federal support for research utilizing embryonic stem cells may be issues that Biden can act on once in office, given they do not require congressional approval.

Congress still up in the air

While the presidential election’s outcome is certain, the balance of power in the U.S. Congress remains in limbo.

Democrats have maintained their majority in the U.S. House of Representatives, and most expect Nancy Pelosi, D-Calif., to continue in her role as speaker of the House. The majority in the Senate, however, remains uncertain. Georgia had two open Senate seats this election, and in both cases neither candidate received a majority of the vote statewide, which has triggered a pair of runoff elections.

With Republicans likely to withstand challenges to incumbents in Alaska and North Carolina, the anticipated Senate makeup favors Republicans 50–48, with the two Georgia seats unsettled. Republicans need to win only one of those Georgia seats in the runoffs to retain their majority, while Democrats need to win both seats to earn a 50–50 tie in the Senate. If the latter happens, Vice President-elect Kamala Harris will be able to cast tie-breaking votes.

A Democratic House and Republican Senate is a recipe for legislative gridlock; large-scale policy changes would be unlikely.

That said, agencies such as the National Institutes of Health and National Science Foundation have seen their budgets increase over the past four years, a period that included a split Congress and a White House hostile to investments in science.  For example, the NIH’s budget has increased 45% since fiscal year 2016 — a trend that is unlikely to change anytime soon.

The American Society for Biochemistry and Molecular Biology policy team will provide a more detailed look at how Congress will affect science once the Georgia races are settled.

Finally, the NSF director serves a six-year term in order to keep the position nonpolitical. The current director, Sethuraman Panchanathan, was appointed by Trump in late spring. I don't expect him to be replaced, but I do anticipate that the Biden administration will seek to appoint a new head to the NIH.

Francis S. Collins, appointed by President Barack Obama in 2009, is the second-longest-serving director in the agency's history. The incoming administration might consider looking for more diversity in the leadership. The NIH has had only one woman director (Bernadine Healy from 1991 to 1993) since its founding in the 1880s.