ASBMB Today Opinions Pride through my science side
Transition States

Pride through my science side 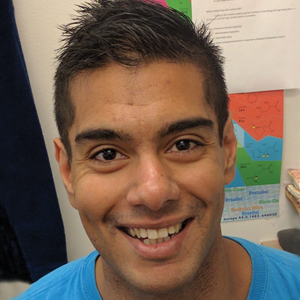 In the U.S., the summer months are usually when the lesbian, gay, bisexual, transgender, queer, intersex and asexual community celebrates Pride. It is a powerful, self-affirming statement of refusing to be shamed for being oneself. This summer was a bit of a breakthrough for me when it comes to Pride, because I finally am proud of myself. All it took were, well, fluorescently labeled T cells!

My first year in graduate school came with its challenges: moving to a new city, a new department, a new lab and a project that seemed straightforward. But then my project became a stolid, immobile thing for a good year or so. Also, someone outed me to my dad. This was, to use one of my favorite words, problematic.

I come from a north Indian Brahmin family, an upper-caste line of Hindus who, according to the scriptures, are protectors of knowledge and learning. My father, steeped in conservative values, was not pleased with this new information about me. A lot of regrettable things were said, including my father telling me the typical “This sort of thing is not in our culture.” Details aside, what had happened was that I had failed. I, the eldest male child, who was supposed to do great things, had deviated from the plan and become a stereotype. For my dad, years of negative tropes associated with gay men coalesced. I went from being his pride to becoming something sordid.

I envy the scientists who check their emotional baggage at the door. I am not one of them. This crisis with my dad infected everything I did: Suddenly there were mislabeled mouse cages and forgotten positive-control conditions. My boss, who patiently had been watching this play out for a while, finally had a talk with me.

After I gasped out the story, my boss said, “Does your father know about the sort of work you do? Why don’t you show him some of the movies you’re making?”

I was beginning to get into live-cell imaging. It involved deriving dendritic cells or T cells from whole blood, labeling them with fluorescent dyes and imaging them doing their job. Anyone who has done time-lapse microscopy can tell you that it is beautiful. The cells, all lit up, crawl around, interacting with each other, perhaps flashing light.

“Show him your science side!” said my boss. Honestly, I didn’t understand how it would help, but I decided to try. Through WhatsApp, I sent my dad movies of T cells labeled with Cell Tracker Red darting around on integrin-coated surfaces.

“Yes, Daddy. I sorted the cells and everything!” I said, checking that “Please like me!” plea in my voice.

And so we talked as we hadn’t in a long time. We talked about adaptive immunity and the roles of T cells and what I was hoping to learn by observing them. (The work is now a part of a study in the journal Cell Reports.)

For me, science did what science does best: It challenged preconceived notions and replaced stereotype with nuance. For my father, seeing my science side dispelled the awful, media-trained idea of what gay men are, in which if we’re not dying poignantly of AIDS or violence, we are the token hot gay friend or the bitter queen who exists solely to quip. My science side changed that idea for my dad. My science side changed me, too. In answering my father’s questions about science, it hit me that I actually was doing something significant and that everything these movies revealed to us was brand-new information. I was proud of this work and of myself for doing it. My father began to relearn to be proud of me.

This story doesn’t have a neat, happy ending. In some ways, this is a “coming out” for my dad, too. We still argue and struggle to look for clear, loving ways to talk about an issue that may come easy to some families but not so much to mine. Like those T cells crawling on the sometimes unexpected integrin combinations, our path is not straight but circuitous, new and beauteous in its own right.

But my dad still asks about the T cells. Recently, he mentioned how a magazine article that had the word “interferon-gamma” in it made him think of me.

It’s not perfect, but it’s better. It almost seems ignoble to ask for more right now.

Akshat Sharma was a graduate student at the University of Wisconsin-Madison when he wrote this article.