For my industry careers column this week, I talked to Damini Agarwal about her experience working to develop medical devices. Medical devices are a broad group of instruments, materials, implants and more that are made for a medical purpose. They include things like ventilators, diagnostic equipment and prosthetics.

Agarwal is director of product development at Infinite Biomedical Technologies, a biotech company that focuses on developing medical devices for upper limb amputees. She grew up in India and said she knew from an early age that she wanted to pursue a career in science. 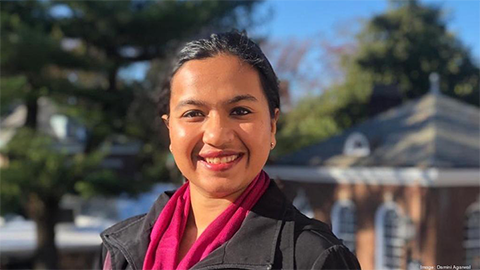 Damini Agarwal earned her master's degree at Johns Hopkins University, where she met the co-founders of a biotechnology company for which she now works. Infinite Biomedical Technologies develops medical devices specifically to improve the lives of upper limb amputees — think arm and hand electronics, batteries and prosthetics.

“In India, by high school you need to make a decision about going into the sciences, arts or commerce,” she said. “For me, it was a no-brainer to pursue science.”

The harder decision was what to do after high school, she said. She enjoyed mathematics, biology and physics but thought there were few career options that would allow her to pursue a mix of all three. She ended up earning her undergraduate degree from Vellore Institute of Technology with a major in biomedical engineering and a minor in computer science.

Throughout the projects she worked on as an undergrad, a particular application stood out to her — medical devices that interfaced directly with the human body.

“I realized I was working with circuits in a biological context and was trying to understand the physics of applying electronics directly to the human body,” she said. “It was fascinating to think about how to tap into signals from the human body itself.”

This passion led her to apply for master’s programs focused on instrument design. She landed at Johns Hopkins University in Baltimore, where she worked to develop neuroprosthetics.

A connection to industry

While in grad school, Agarwal noticed that industry career opportunities weren’t highlighted much.

“Research graduate programs don’t really provide industry as a career pathway,” she said. “I only had general ideas about industry when starting grad school.”

The lab in which Agarwal ended up doing her master’s thesis work changed that. She said the lab itself was very research based but had an ongoing partnership with Infinite Biomedical Technologies. IBT was founded by her graduate mentor, Nitish Thakor, and a previous lab member, so she had the unique opportunity to work at the industry–academic interface during her thesis work.

As she was finishing, she began thinking about if she wanted to move into the industry space or stay in academia after earning her degree. She was offered a job at IBT, opening the door to industry.

“I was really torn between staying in academia and going for a Ph.D. or going into industry,” she said. “The tipping point was a very personal decision and was largely due to the type of position IBT was offering me.”

Agarwal started as a biomedical engineer with IBT. In this position, she was able to oversee her own research prototypes throughout the commercialization process, from conception to design and development to approval and use. It was this hands-on role and oversight that made the position appealing to her.

“The opportunity to see a medical device product from start to finish is not something that happens frequently,” Agarwal said. “The uniqueness of this opportunity was a pull.”

After a year as biomedical engineer, Agarwal was promoted to product manager and then again promoted to her current position, director of product development.

Agarwal said IBT has about 15 employees and that, because of the company's small size, she wears many different hats.

“It’s been great because I’ve been able to participate in a lot of different of areas within the company,” she said. “I’m involved in product development, production, and regulation and quality control.”

One day she may work with the product development team to figure out how to translate research into market-ready technology. The next she could be working on supporting products already on the market. This could involve responding to technological bugs that need to be fixed or rolling out new features for existing products.

She said a large part of her time is also spent on making sure IBT’s work is compliant with Food and Drug Administration regulations and putting together regulatory applications for new products the company wants to bring to market. To this end, she coordinates with the production and manufacturing teams to ensure all devices are safe and efficient for patient use.

When I spoke with her in December 2020, she said IBT had been able to adapt to the changes brought on by the COVID-19 pandemic. Although there was an increased remote component, her day-to-day responsibilities hadn’t changed much.

Importantly, Agarwal said she doesn’t regret her decision to go into industry and would encourage others to consider it as a career path was well. She said one of the biggest advantages of the healthcare industry is that it is a fast-growing space and is at the intersection of many fields — medicine, biology, engineering and more.

“The field is rapidly growing and very cutting edge, so there’s ample opportunity for growth and diversification of your skillset,” she said. “We’re never going to get to a point where mankind doesn’t need healthcare, so it’s a good space to build a career in.”

But the rapid evolution of the healthcare industry can also be seen as a disadvantage, Agarwal said.

“Because the industry is highly evolving all the time, it requires a fair amount of work to stay on top of all of the changes that are taking place,” she said. “If you’re good at something today, it doesn’t mean you’ll stay current, so you need to put the work in to do so.”

Agarwal has a few pieces of advice for those considering a career in biotechnology.

“Industry career pathways can be so diverse, and it’s a personalized choice,” she said. “Pick an area that you really enjoy working in, because if you don’t enjoy the work you’re signing yourself up for you’re going to be miserable.”

Once you’re in your new position, no matter what it is, Agarwal said to remain a lifelong learner. By staying on top of research or market trends, she said, you can help continue your success and adapt to the evolving landscape.

As far as job applications go, Agarwal said to be flexible and keep an open mind when looking for positions. She said she’s seen people who have very defined and specific ideas of the job they want during the job application process and if they don’t get the job, they’re lost. Instead, she recommends taking a different approach. “Use a wide search and apply to many different types of jobs at first,” Agarwal said. “Then be selective when you’re picking a job offer, not when you’re picking which jobs to apply to.”

She also said that there’s a lot of room for exploring different options in industry, so if you start a job and don’t like it don’t give up. You can always search for another position or another company to work for that may be a better fit.

Overall, Agarwal said she doesn’t regret her decision to go into industry and encourages others to consider it as well, even if it isn’t a career path that they’re familiar with. Medical devices represent just one sector of industry, so stay tuned for more insights into industry in future columns.