‘I found the notes’ 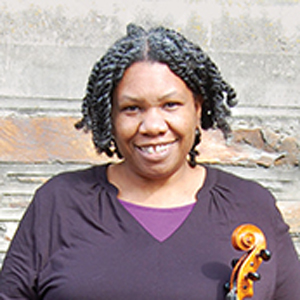 Many years ago, when I read Mark Salzman’s novel The Soloist, about a cellist whose childhood promise overshadows his adulthood, I was introduced to the cello suites of J.S. Bach. Salzman’s protagonist is a cellist in his 30s, a former child prodigy who no longer plays in public. Determined that he will someday play again professionally, he practices the Bach cello suites every day but only for himself and his cat.

Rossie Clark-Cotton is a Ph.D. student at Duke University.

When I finished the novel, I wondered what sort of pieces could hold that kind of allure — to warrant revisiting each day? Was it their technical difficulty? Their emotional richness? Alluring melodies? I went out and bought a CD of the pieces. I’d never really heard much string playing, but I’d assumed I’d only hear a melody, a single voice carrying a tune. But Bach had embedded harmonies in the melodic line of a single instrumentalist. The sound was dark, rich and complex. It suited the instrument on the cover of Salzman’s novel. I loved the cello suites. From then on, in my fantasy life, I was a cellist.

Years later, I lived in a city with several well-regarded music schools and a dearth of jobs for the professionals who were trained there. Opportunities to take music lessons were all over, including at the music school a brief walk from my apartment. I wanted to learn to play the cello, but I had no car and would struggle with it on public transportation. A friend played the viola, and she taught me all of its virtues: less flashy, less shrill and richer in sound than the violin; smaller, more manageable and cheaper than the cello. It is hard to hear the viola line in a string quartet, but you’d miss it if it wasn’t there. “The inner voice of the strings,” she said, “the alto.” I sang alto in choirs, and I loved low notes. Alto strings would suit me. I could rent a viola from a local instrument store.

I mentioned my idea to a few musician friends. “Learning the viola is hard,” I was told. “It’s really easy to pick up the guitar, but you have to learn the viola when you’re young, or you won’t be any good.”

“But I can sing,” I objected. “I have a pretty good ear. I sing on pitch. I can read music decently.”

“It takes so much practice,” I heard. “Do you have time for that?”

This was a good point. I had a full-time job. I sang in a chorus and took voice lessons. I was thinking about going back to school for a Ph.D., so I took a biology class most semesters. No, I probably didn’t have time to learn to play the viola. But it was summer. My chorus was on hiatus, and I wasn’t taking a class. My work schedule had become a little lighter. The local music school offered trial lessons – as many or as few as you wanted – over the summer. No, I probably didn’t have time, but I was curious: Could I do it, or was it too late? I would only know if I tried. So I went to the instrument shop, picked out a rental viola and signed up for a handful of summer lessons.

The first surprise: For reasons I still don’t quite understand, the viola has its own clef. As a choral singer, I can read the treble clef, and in a pinch, I can summon some mnemonics from childhood and muddle through the bass clef. But a C on the alto clef is just half a line below its position on the treble clef. So I was constantly looking at a note and thinking, “OK, that looks like a G, so that means it’s an A. I think that’s a D, so it’s really an E.” To play the viola, I would have to learn to read the alto clef, a skill that would serve me no other purpose unless I also decided to take up conducting.

But there were interesting things about the viola. My teacher started me with exercises to learn to hold the bow — how to pivot my wrist, the proper angle and height for my elbow. He showed me how the quality of the sound changed when I used different parts of the bow and when I placed it on different parts of the bridge. I found that applying resin to the bow allowed me to produce a lovely sound with less effort. I listened as the tone changed throughout a bow stroke, and I tried to make a consistent sound throughout the note. I discovered how responsive the instrument was to subtle changes in my bowing. I started to recognize the clashing vibrations that signaled that the strings were out of tune relative to each other. I began to play scales that didn’t make me cringe and learned some simple tunes. I signed up for more lessons during the fall and eventually bought the viola. But I didn’t practice enough, and progress beyond first position was slow.

I recently moved to start a Ph.D. program, and as I sorted things from my closet, I found the viola case, where it had been resting for two years. I opened the case and recognized it all: the dark, polished wood; the smell of the resin; the bow not quite taut. I tightened the bow and played a few strokes. It sounded out of tune, so I took a few moments with the metronome and then tried again, playing a scale. My fingering was off, but with a few attempts, I found the notes. But it was time to pack and move and set up my apartment and then to meet classmates, navigate a new campus, start classes, begin lab rotations and apply for fellowships.

But it turns out that my new home also has a music school just down the street. Someday.

Rossie Clark-Cotton has degrees in biology and linguistics and is currently a Ph.D. student in Cell and Molecular Biology at Duke University. She was a 2013 winner of the Just-Garcia-Hill science blogging contest, a 2014 American Academy for the Advancement of Science Mass Media Fellowship semifinalist and a participant in the ComSciCon 2015 science communications workshop. She enjoys reading, singing and learning about the history of rural Mississippi, where her family has lived for more than 130 years. This semester, she is satisfying her love of J.S. Bach by singing the St. Matthew Passion as a member of the Duke Chapel Choir.