Editor’s note: This is the first in an occasional series of essays from a writer who has his ear to the ground when it comes to life in the lab.

I was standing at the counter of the juice bar in Logan Airport, ordering my breakfast, when I felt a shadow fall over me. Behind me towered a man well over 6 feet tall. His spiked hair stood up like a row of fenceposts, and his smile gleamed. The creases on his pinstriped shirt looked like they’d cut a steak. As I moved aside to wait for my drink, he approached the counter. The man at the cash register said warmly, “What can I get you, Governor?”

Then it hit me. The stately blonde sitting at the table, the one who looked like Ann Romney — that was Ann Romney. And this was Mitt Romney. It was 2013 and he had recently lost the presidential election, but, feeling a little thunderstruck, I thought he still looked every inch a president. Sock Puppet, Ph.D., started his career as a teaching assistant.Courtesy of Mohammed Refai

Gamma rays created the Hulk. The bite of a radioactive spider turned Peter Parker into Spider-Man. When an assistant professor was asked to teach a large introductory biochemistry course, without sufficient funds for a teaching assistant, Sock Puppet TA was born. Since then, Sock Puppet has attended many classes and earned undergraduate and Ph.D. degrees in biochemistry. Sock Puppet, Ph.D., is employed as a research scientist in a Mountain West university and has seen a thing or two in his many years in and around academia. He knows what lurks in the back of the -80 °C freezer as well as the bottom of the sock drawer, and he counts many struggling graduate students and young faculty among his friends. When Sock Puppet is not wrangling graduate students, he enjoys jogging, skiing, macramé and searching for his long-lost twin brother in and around the dryer.
(Email Sock Puppet, Ph.D.)

Primates may be conditioned to look for certain physical traits in an alpha. Mitt Romney had those in spades. But what about the rest of us? The less than eagle-eyed? The height challenged? (In the interests of full disclosure, I should tell you — I am a sock puppet.) Dare I say the nerdy types? Can we not also be leaders? Of course, the answer is yes, we can, and in some cases we absolutely must step up. Here are the top six things I’ve learned about leadership from helping to manage a large-ish group of graduate students for the past dozen years:

1.If you don’t feel like a natural-born leader, try imitation.

We’ve all heard versions of this before — for example, dress for the job you want, not the one you have. I’d take it a step further. When I was a postdoc, there was a snappy young scientist at our institute — I’ll call her Marilyn Mertozzi — who walked on water. She was so good, it seemed she could walk on any solvent. I took her bioorganic chemistry course, and I suspect I learned a thing or two about arrow pushing. The more enduring lesson, however, was about confidence and how to project it, which I learned by observing her. I noticed that several women in the class picked up on this too. Whether the change was made consciously or not, soon there was a small flock of Marilyn clones, imitating her dress, her diction and even her ticks.

It’s said that graduate students often pick up something of their adviser’s style. It helps if your adviser is someone you can relate to. There are still very few sock puppets in science, and I admit it has been difficult finding an appropriate role model. But when I’m about to give an important talk or advocate for myself in front of my boss, I still put on my best Marilyn impersonation, and I go out guns a-blazing.

2. “Boss” is a four-letter word; however, “leader” has six letters.

Research labs, by and large, are not populated by quarterbacks. Many of us went into science because we appreciated working independently or in highly collaborative structures, with big tents and round tables. To many scientists, the word “boss” may have a highly pejorative connotation. You may prefer the more inspiring word “leader.” I’m here to tell you that being a leader is a good thing and probably something you should aspire to, regardless of your actual job title. Why? Read on.

3. A leader finds the hole.

When I was a graduate student, I worked on a collaborative project with an assistant professor who was notoriously disheveled. He was at the stage of his career where he still worked in the lab, or tried to, though he probably should have stayed away.

The many bleach stains and acid holes in his clothes were testaments to his folly. In fact, we students had a game we liked to play called “Where’s the hole?” The first person to find the hole in our adviser’s clothing on any given day was the winner. It never took long.

I think of that now when I work with graduate students in the lab. Some have terrific qualities to recommend them; but everyone, without fail, also has some nagging flaw. Maybe they’re a little bit careless or lazy. Maybe they give up too fast — or not fast enough — when an experiment isn’t working. Perhaps they can’t assemble a sentence or make a figure to save their life. Like the Scarecrow, the Lion and the Tin Man, every one of your ragtag band will have a problem. And just like the Great Oz, as their leader, it’s your job to find the hole and help them fix it.

As a young sock, I visited the beaches at Normandy, France. Like many visitors, I was awestruck, imagining boat after boat dispensing scared young soldiers onto the shore under a rain of bullets and mortar fire. I always wondered how their commanding officers were able to marshal them up the beach and into enemy lines. Surely, such techniques must be sufficient for motivating discouraged students to go back into the lab?

A few years back, we had an Air Force captain in our graduate program. Though he’d not seen warfare of the Normandy variety, he had nonetheless completed a great deal of officer training. Now was my chance to learn: How does the military teach officers to lead?

In partial answer to my question, the captain referred me to a chestnut of a book — Dale Carnegie’s “How to Win Friends and Influence People” — and a recipe of sorts that his Air Force colleagues had derived from it. He said that when they needed to criticize or correct someone at their own rank or above, he and his fellow officers would cushion the blow by wedging it between two compliments: the so-called “s**t sandwich.”

Much more direct criticism from officer to underling would be completely acceptable; however, even recruits sometimes had a hard time hearing criticisms when dished out too directly.

And so it goes in the laboratory. The student’s shortcomings are only too clear. He fails to keep an organized notebook. As a consequence, no one else in the lab can understand let alone repeat his experiments. You’ve warned him about this a thousand times. You are so frustrated, you want to roll up the notebook and whack him over the head with it. Instead, you offer:

“You’ve really got to record your methods much more carefully, however.” (S**T)

“That way, everyone in the lab will get to see exactly how you work your magic!” (BREAD)

5. Sometimes, a leader just has to pick up the damn clock.

A famous chemist/biochemist from the University of Illinois — let’s call him Yi Lu — once told me a story.

A big clock hung on the wall over the door to his students’ group office. One day, someone slammed the door too vigorously, apparently, because the clock fell off the wall onto the floor in the middle of the doorway and smashed into several pieces. In order to enter or leave the office, the students had to step over the messy remains of the clock. Professor Lu watched them do this all day long from his office across the hall. He grew increasingly frustrated. Would no one stop and pick up the clock — if not to replace it then just to remove a potential tripping hazard? Quitting time was approaching, and still no one had dared to touch the broken clock. Finally, Professor Lu himself came with a broom and wastebasket and took care of the mess.

When I was a postdoc, there was a time when there were 12 of us, each more ambitious than the next, all sharing the same cramped lab space. No one had time for good manners or even basic sanitation and — needless to say — the lab was an incredible mess. One day, my co-worker Mike (now a faculty member and father of two) rounded us up and said: “We’re having a lab cleanup. All of us. This afternoon.”

Whether he or she has the requisite title or authority, the person with whom the buck stops is, by virtue of taking action, the leader. You don’t have to have a fancy title or position to exert this kind of quotidian leadership; you just need to be responsible. And let me tell you, these sorts of innate leaders are lab gold.

6. Some of the most effective leaders are the least visible.

In an episode of the cartoon “Futurama,” Bender, the robot, floats out into deep space. After many weeks, he drifts toward a mysterious nebula that speaks to him. The entity has been quietly monitoring Bender’s journey through the cosmos, including a time when Bender harbored a microscopic civilization that thought he was God. Bender asks the entity if it is God. It replies, “Possibly.” Bender tells him, “You know, I was God once.”

“Yes,” says the entity. “You were doing well, until everyone died.”

The entity then gives some advice on how to do a more effective job as God. The same advice might as well apply to those of us in more mundane positions of leadership: “If you do too much, then people become dependent on you. If you do too little, they lose hope … When you do things right, people won’t be sure you’ve done anything at all.”

Now there’s a meme that you can hang your hat on. 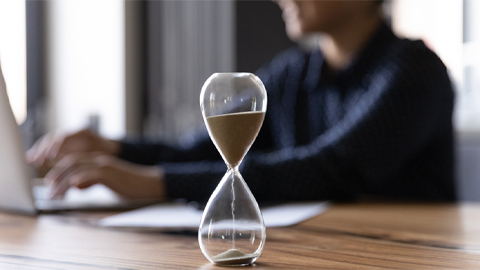 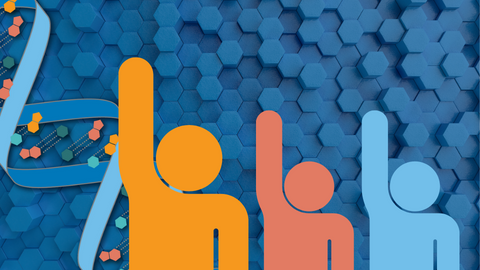 Just added: Call for ASBMB committee members and webinar about leveraging post-Ph.D. training for career advancement. Reminder: Proposals for #DiscoverBMB interest groups are due this week. 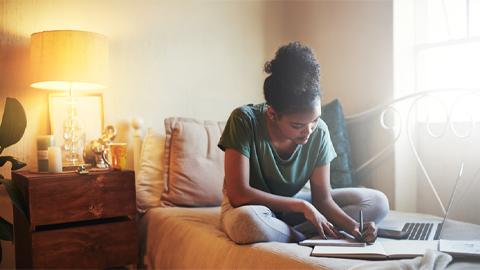 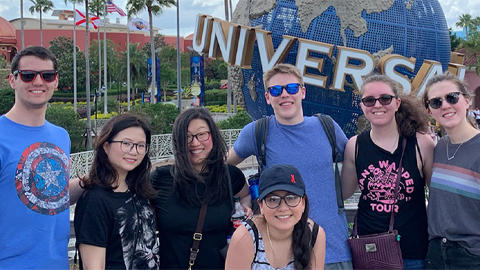 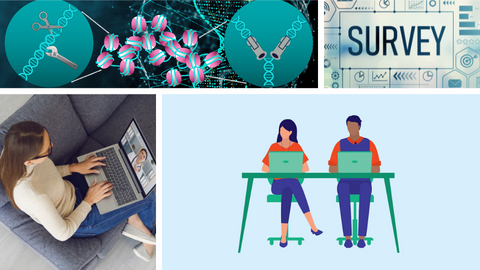