Jacqueline Dron takes her research to heart — literally. When she’s not at the bench, you might find her playing flag football with friends, a hobby of hers for over eight years now.

“Physical sports are part of a healthy lifestyle,” she said. “In a lipids lab, healthy living is always encouraged.” Jacqueline Dron analyzed more than 1,000 DNA samples to determine what genetic factors might be related to abnormal levels of cholesterol or triglycerides.

Dron, a graduate student at Western University in Ontario, Canada, was selected by the Journal of Lipid Research to speak in a special session featuring up-and-coming researchers at the American Society for Biochemistry and Molecular Biology annual meeting. She will highlight her research on human genetic variants that influence plasma lipid and lipoprotein levels.

Dron has wanted to be a researcher for as long as she can remember. She thinks it’s the desire to make discoveries that made research so appealing.

“From there, it evolved into wanting to make discoveries that could one day be used to help others,” she said. “That is probably why I was drawn towards human genetics.”

Since starting graduate school in Robert Hegele’s lab in 2015, Dron has analyzed over 1,000 DNA samples from patients that have abnormal levels of cholesterol or triglycerides. Her goal was to identify what genetic factors were involved in influencing these lipid phenotypes.

Unsurprisingly, the answer was not simple. Many phenotypes are influenced by multiple genetic factors, making the analysis complex. Nonetheless, Dron has been able to identify several key genetic variants that influence cholesterol and triglyceride levels in humans.

“I like being challenged and having a change of pace,” she says. “Almost everything (in research) is a challenge, and the pace is always changing.”

Elevated levels of cholesterol and triglyceride lipids are risk factors for diseases such as stroke and heart attack, and Jacqueline Dron has a simple research question — what genetic variants cause these abnormal lipid levels?

To find the answer, Dron has studied over 1,000 DNA samples from patients with abnormal lipid levels to identify correlated genetic variants.

It turns out her straightforward question has a complicated answer. Her research shows that most patients have polygenic susceptibility, meaning they are simultaneously influenced by multiple genetic variations. This means that there generally isn’t any one gene that causes the abnormality. Instead, it’s the sum total of many genetic variants.

Her work has improved our understanding of the underlying genetic causes of variable plasma lipid levels. She has published two papers in the JLR, one in 2017 and one in 2018, related to this work. 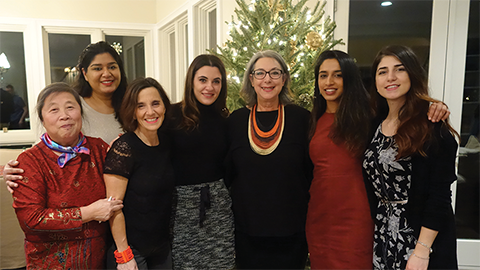