Aziz Sancar at the University of North Carolina School of Medicine, a 2015 Nobel prize winner, won the American Society for Biochemistry and Molecular Biology’s Bert and Natalie Vallee Award in Biomedical Science for his research on a type of DNA repair called nucleotide excision repair and the enzyme photolyase, which lead him to study the circadian clock. Both areas have implications for cancer prevention and treatment. 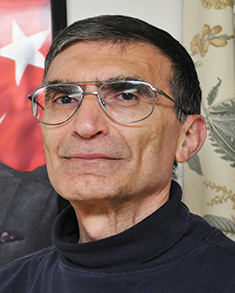 “I am honored to receive the Bert and Natalie Vallee Award and dedicate it to my Ph.D. mentor C.S. (Stan) Rupert who discovered DNA repair and to the students and postdocs who have worked in my lab for the past 33 years to understand the mechanisms of DNA repair.” — Aziz Sancar

The award was established by the Bert and N. Kuggie Vallee Foundation in 2012 to recognize established scientists with outstanding accomplishments in basic biomedical research.

In his recommendation letter for Sancar, Jerard Hurwitz at the Sloan-Kettering Institute says, “Dr. Sancar’s work has focused on the molecular mechanism of DNA damage repair, initially studied in E. coli and now in mammalian cells. His laboratory has also studied the circadian clock system, which depends on the photolyase system in lower forms and cryptochromes in higher eukaryotes. These somewhat disparate research efforts, primarily through Dr. Sancar’s work, have been linked together since the cryptochrome system acts as a repair system in higher eukaryotes.”

Paul Modrich at the Howard Hughes Medical Institute and Duke University, who has collaborated with Sancar on several papers, and who was a co-winner of the 2015 Nobel, supported Sancar's nomination for the ASBMB award. He says: “Aziz Sancar’s contributions to the DNA repair field are legendary. I can think of no one more worthy of the Vallee Awards in Biomedical Science.”

(In December 2015, Sancar, Modrich and Tomas Lindahl, at Clare Hall Laboratory at the Francis Crick Institute, received the Nobel Prize for chemistry for their contributions to the field of DNA repair.)

Sancar “always impressed me by his intensity in pursuing his research goals, by his drive towards clarifying biochemical processes to the last detail, and by his highly infectious enthusiasm for research,” writes Johann Deisenhofer at the University of Texas Southwestern Medical Center in his recommendation letter. He credits Sancar as “an essential figure in making DNA photolyases the ‘best understood enzymes.’”

Sancar also was nominated for the award by Judith Bond at Penn State University and Henrik Dohlman at UNC, Chapel Hill. They note that Sancar “has provided valued service to our community. He has trained over 50 graduate students and postdoctoral fellows and hosted many international visiting scientists to his laboratory. He and his wife founded a Turkish cultural center near the UNC campus, as well as the Aziz and Gwen Sancar Foundation for educational and charitable purposes to increase understanding of Turkey, and to promote closer ties between the United States and Turkey.”

Sancar earned his medical degree from the Istanbul University School of Medicine in Turkey and studied at Johns Hopkins University for a year and a half on a NATO fellowship. The fellowship was distributed on the basis of merit to students who wished to pursue advanced degrees in science and technology in NATO countries. Sancar later earned his Ph.D. in molecular biology from the University of Texas at Dallas, where he conducted research under C.S. Rupert, who discovered the enzyme photolyase in 1958. During his postdoctoral fellowship at Yale University, Sancar invented a simple method for identifying plasmid-encoded proteins in E. coli, known as maxicells. He began teaching biochemistry and conducting research at UNC, Chapel Hill, in 1982. In 1997, he was named the Sarah Graham Kenan distinguished professor, a position he still holds today. Sancar was elected to the American Academy of Arts and Sciences in 2004 and the National Academy of Sciences in 2005.