ASBMB Today Opinions The nightlife of a scientist–mother
Night Shift

The nightlife of a scientist–mother 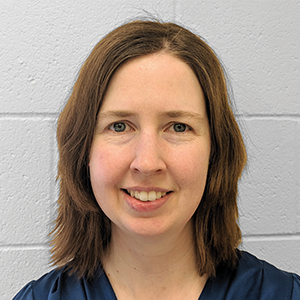 My half-awake mind dismissed the gentle rustling, but the movement persisted. Groggily I remembered the newest member of our family.My hand slipped between the crib bars, trying to soothe my nearly three-month-old son. A glance at the clock confirmed that once again my mind had deceived me; a couple of hours had passed. These awakenings interrupted my sleep three or four times a night. And every time, it felt like I had just dozed off.

A plaintive crying joined the increasingly frantic flailing inside the crib. My son was hungry. And if I waited much longer, he might wake up the entire household.

I pulled back my warm sheets and, like an automaton, carried out the protocol that, though still new, had become familiar. I sat up, situated him on my lap and reached for my phone. Even on its dimmest setting, the screen seemed bright. Squinting, I navigated to the baby app and started the nursing timer.

My husband remained sound asleep. I’d crawled into bed early, after getting the baby down, while he stayed up entertaining our toddler until her bedtime. I missed the evenings with them, but this was the easiest way for me to accumulate maybe six hours of sleep, combining interrupted chunks plus sleeping in.

My husband didn’t have the luxury of sleeping in — while I was on maternity leave, he was already back at work. As a university professor and department chair, he’d need to be ready for a full day of teaching, mentoring, back-to-back meetings and directing the bucket brigade to put out the usual departmental fires.

Not long ago, I’d stayed up late too. But now I was up at all hours. A quiet, private time with our infant.And the manuscript.

My eyes adjusted while I checked for new emails from my collaborators. A few replies had arrived.They thought the revised figures looked good and the cover letter justified the novelty of our findings. The way we explained that unexpected result in the discussion section would have to be good enough for now; my co-authors agreed that we could wait to do the experiment later, after seeing reviewer responses. I couldn’t do experiments now, in any case, and was starting a new job soon after my maternity leave ended. We would aim to submit later in the week. It would be my first paper as a postdoc in the lab. I was thrilled to have created a paper with a Nobel laureate.

I wished I could share the news with my husband, but I dared not disturb him.

I thought back to the frantic months in the lab, all of us racing against the clock to collect the data before my due date. Were the figures we’d outlined on the whiteboard at that first manuscript meeting still the best way to tell this story? Did the surprising results complement the narrative or derail it? What gaps remained? Did we have the time fill them before I left the lab for months? Tick tick tick. If we didn’t make this deadline, would we be scooped? If we succeeded, would the reviewers appreciate the significance of the findings in such a niche field? Would they be right not to appreciate them?

Somehow, we’d kept the momentum going, even across multidisciplinary collaborations. Somehow, I’d managed, even with increasing fatigue and new aches and pains, to collect the data before I’d left. It was a crazy plan. Somehow, it worked.

After giving birth, I worked from home to finish writing the paper. I scraped together the free moments of my day — between diapers, laundry, scarfing meals my husband had prepared and trying to soothe a fussy new being. I was grateful to collaborators who continued to wrap up loose ends in the lab and communicate via email. Face-to-face meetings (even virtual ones) were out of the question (I was still trying to teach my newborn what a schedule was; perhaps by the time he went to college he’d get it). Luckily, he was healthy and napped well. I often nursed him at my computer; he’d fall asleep on my lap, and I hardly noticed the hours passing as I focused on the manuscript. I pecked away at the keyboard with one hand.I fought for each spare second. Outlining, writing, editing, rewriting, making figures, tweaking figures, retweaking figures and editing my collaborators’ revisions.

Was there an alternative to chasing this manuscript, this obsession? Motherhood. I wanted what was best for my baby, to bond with this tiny fascinating life. At the same time, I felt like I was fighting for my identity as a scientist against potentially all-consuming motherhood. It did not surprise me to learn of a recent study published in Nature showing that more than 40% of full-time female scientists quit science or became part-time after having their first child (compared to 23% of new fathers). Being a new parent is exhausting. And there’s the guilt. Was I still being a good mother? Was my drive to publish diminishing my motherhood? Would my children grow up to resent me because I have a career?

My return to full-time work was also a matter of finances; without my job, we could not afford our mortgage. One postdoc I knew could not afford full-time daycare and had to juggle taking baby care with their partner. Yet another postdoc said she couldn’t have kids because she couldn’t afford the childcare on her salary. A female professor once told me that, financially, it was better to wait until landing a tenure-track job before having kids, but with fertility rates dropping in a woman’s 30s (more steeply after 35), and most postdocs being 30-34 years old, and most first tenure-track positions being landed at age 33-36, it is definitely tight timing. Tick tick tick.

My phone vibrated. “Have fed for 15 minutes,” a pop-up told me. The baby was asleep, his lips barely moving. Gently I lifted him, patting him close against my shoulder, and he let out a satisfying burp. As I was changing his diaper, he woke up. In the dark room, my hands went through the familiar motions. He softly cried, and again I tried to calm him before the wails woke my husband and toddler. He was ready for round two.

Sitting back in bed, I started the timer again.

What would I be doing when I got back to lab? I opened my action items and added a few more bullet-pointed experiments to the long list. I’d have only one week in lab before starting my new job. Five days to wrap it all up. If I made the cDNA on Monday morning, assuming the RNA was still good, how many qRT-PCR plates could I run? Where would that put me by Wednesday, and then by Friday, assuming I wasn’t so sleep-deprived that I botched the experiments? I opened my calendar app and blocked out time for the runs.

Then I shifted the times I already had blocked off for running to the lactation room, roughly every 2-3 hours. (If I spaced the times out more, would there still be enough milk to avoid formula for a while?) I tried to remember which incubation steps were at least 20 minutes long, allowing for a lactation room visit. Thinking about a recent study showing that the time of day that milk is produced acts as a circadian cue to the infant, I set a reminder to label my bottles when I pumped, and I hoped daycare could follow such labeling instructions too. It would be nice if that helped him sleep through the night.

Keeping busy would at least help distract me from missing him. We liked the day care center but didn’t know our baby’s caregivers. I hoped he’d be in good hands, that they’d get him to take his bottles well, that if he managed to roll onto his belly during a nap they’d make sure he didn’t suffocate. I hoped he wouldn’t catch a cold from the onslaught of day care germs, and then I felt guilty as I realized I was worried about how his illness might disrupt my carefully planned experimental schedule.

I’d have more flexibility at my new job as director of a new shared stem cell center. It was focused on my specialty – researching human pluripotent stem cells.I’d be doing fewer experiments, but I’d have more meetings and teaching obligations, so picking up sick kids still would be a careful dance with my husband and his busy schedule. Having my own office meant I could pump at my desk, with little disruption to my work.

I opened my action items for getting the stem cell center off to a good start. Move forward with purchasing the specialized tissue culture incubators. Look for a refurbished, used or demo microscope to save funds. Set up the center’s website to attract users. Get the word out on the training that will be offered. I wanted everybody to know about this new resource where people could grow their own cells, do their research and receive hands-on training. I dreamed of it being busy with users conducting world-class research and forging multidisciplinary collaborations. How would I get there? How long would it take?

My phone vibrated. “Have fed for 15 minutes.” I listened to the baby’s rhythmic, peaceful breathing. I set my phone back on the nightstand. Gently lifting my son to my shoulder, I patted him a few times and he burped. I held him a little longer, feeling his cheek against mine. Who will you be someday? Will you become a scientist like your parents, try to answer the difficult questions of our time or build tools to help humanity — or wisely run from the profession?

He settled in his crib, and I settled back into bed. Emails I wanted to send and action items to add to my listsstill buzzed through my brain, but I resisted picking the phone back up. Soon, the gentle breathing of my husband and baby lulled me back to sleep.

Suddenly, I heard a gentle rustling, followed by a plaintive cry.

I looked at our clock. No, more than two hours had passed, once again. At least it’s easy to fall asleep when one is so sleep deprived.

I placed my baby on my lap and reached for my phone.

Teisha Rowland is director of the Stem Cell Research and Technology Resource Center at the University of Colorado Boulder. She is passionate about science education; Women in Science and Education, or WiSE, efforts; helping scientists become better communicators; and being a geek. Rowland was a postdoc in Thomas R. Cech’s laboratory while on maternity leave, and the manuscript she writes about was published in PNAS. 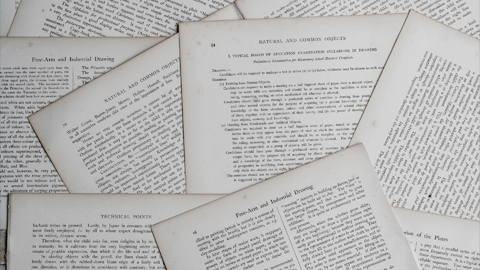 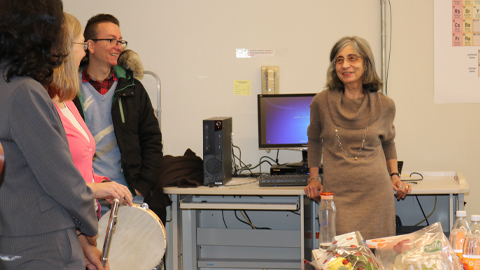 How can we recognize and reward innovation in teaching?

“Publications that describe curricular or pedagogical innovations are rarely cited, and their authors get little feedback about their impact.” 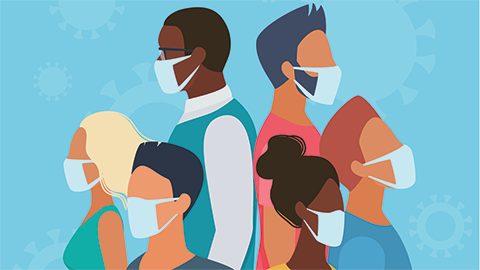 Life after one year of COVID-19

In March 2020, we asked ASBMB members how the pandemic is affecting them personally and professionally. We recently asked them how it has changed there lives, one year later. Here are their dispatches.